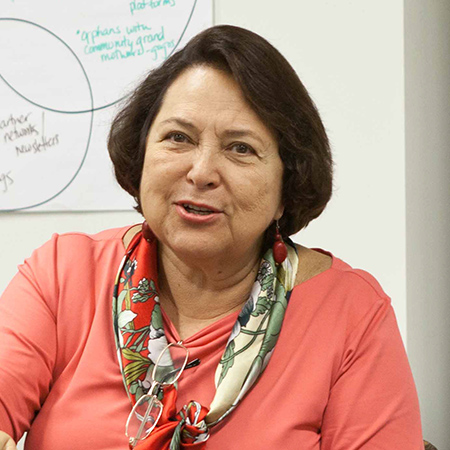 Wanda Engel Aduan is Country Director, Brazil. She has a long history of leadership in the Brazilian social sector, starting with her time as a teacher in the favelas of Rio. Wanda held the position of Minister for Social Assistance in Brazil between 1999-2002, during the second term of President Fernando Henrique. She further extended activities to other sectors of the national government through the Alvorada Project and the Social Protection Network. She was responsible for the general coordination of the conditional transfer programs (Bolsa Alimentação, Bolsa Escola, Programa de Erradicação do Trabalho Infantil). She also coordinated the implementation of the Cadastro Unico (Single Registry) of Poor Families in Brazil.

She was the chief of the Social Programs Division at the Inter-American Development Bank (IDB) between 2003-2006. Prior to this position, she worked in the Poverty Unit as Coordinator of the Poverty and Social Protection Network comprised by Social Development Ministers and Vice Ministers in Latin America and the Caribbean. After leaving the IDB in 2006 and until 2012, Wanda was Executive Chief of Instituto Unibanco, an organization dedicated to creating innovative education technologies, and validating and transferring them to Educational Systems. IU’s main technology (Jovem de Futuro) is now being implemented, in association with the Education Ministry, in six states.

Wanda is currently director of Instituto Synergos Brasil, responsible for a strategic consulting to the Pacto pela Educação do Pará.

Ms Engel was member of the International Council of Women’s Leadership, linked to the US Department of State, consisting of 30 world leaders, and chaired by Secretary of State Hillary Clinton.

She has held prominent roles in international conferences promoted by the United Nations, acting as a delegate at the World Summit for Social Development (Copenhagen), Copenhagen +5 (Geneva), World Conference Against Racism, Discrimination and Xenophobia (South Africa ), and as head of Brazil’s delegation at the World Assembly on Ageing (Spain).

In recognition of the impact of her work, she won the 2012 International Award in the Social Sector, granted by the UN Council for Economic and Social Development.