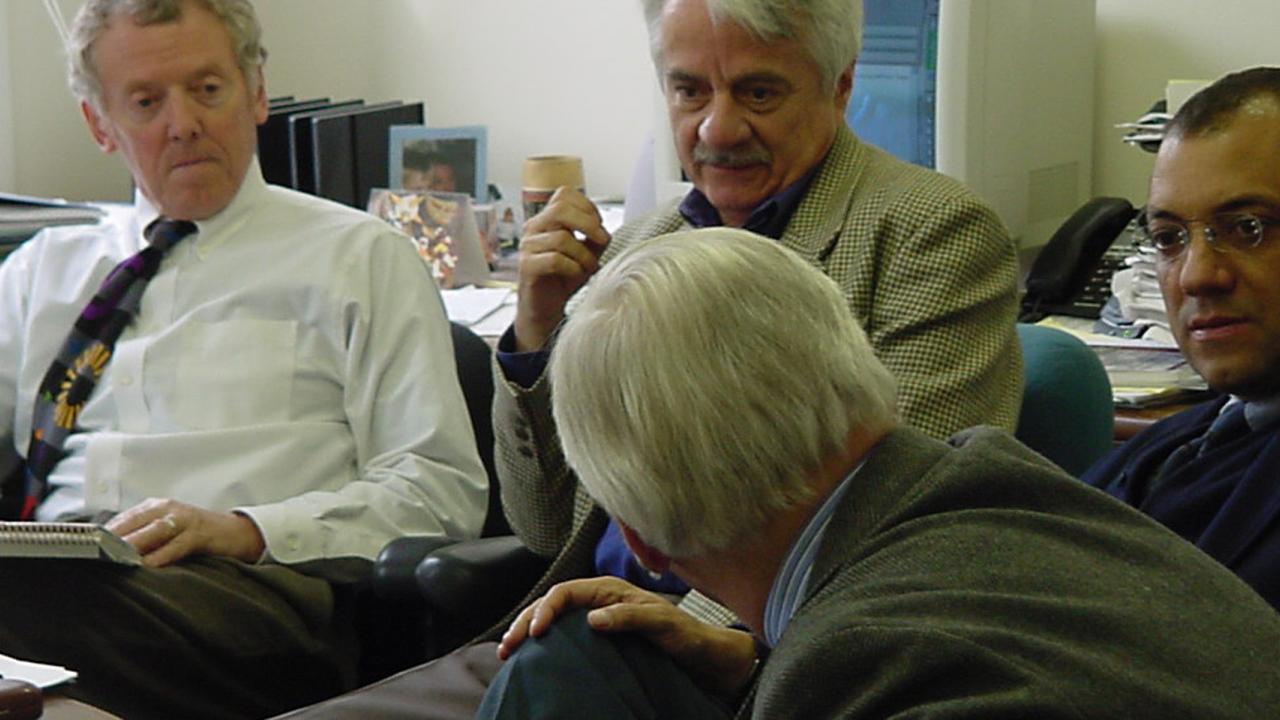 The size of Nevada, it borders Colombia and Peru and includes the Galápagos Islands, Amazonian rain forests, Andean mountains, active volcanoes, tropical beaches, and Quito -- one of the oldest cities in the Americas. Ecuador has a rich history. Its 13 million citizens are racially and culturally diverse -- descendants of mestizos, Indians, Spaniards and Africans.

The other face is harsher. Despite its abundant supply of natural resources, more than 60 percent of Ecuador's population lives in poverty. It has one of the lowest ratings in Latin America on the United Nations Development Programme's Human Development Index.

The Esquel Foundation (Fundación Esquel) has been in the forefront of the fight to reduce poverty and promote sustainable development in Ecuador for over ten years.

Synergos has partnered with Esquel since its inception, assisting in the creation of the organization and, over the years, in its efforts to bridge divides in order to eradicate poverty. In the course of this partnership, Synergos has learned a lot about what makes foundations effective, knowledge it has been able to share with hundreds of other foundations around the world.

The Birth of Esquel: Synergos Helps Create a Prototype

The Esquel Group was a struggling network of Latin American NGOs in the late 1980s. Two of its members, Cornelio Marchán (then Ecuador's Minister of Planning) and Roberto Mizrahi (a co-founder of the Esquel Group), wanted Esquel to become an organization that provided grants to communities and NGOs rather than constantly looking for funds for its own programs.

Local financing for development was a Synergos concern. Then Esquel's founders asked Peggy Dulany, founder, and S. Bruce Schearer, President of Synergos, to work with them to develop and plan a fundraising strategy.

"The group came to us to get our perspectives on the idea," says Schearer. "It was a creative departure and the beginning of a new model. With money from a debt swap, Esquel could be a foundation instead of an NGO, which would allow it to influence policy, award grants, and support community programs."

With Synergos support, Marchán and several other Ecuadorian civil society leaders developed a concept paper. Synergos connected representatives of Esquel to The Rockefeller Foundation, which provided a grant to undertake a feasibility study on establishing and managing the proposed foundation.

"We were interested in the foundation structure as a vehicle that potentially could be used around the world," says Dulany. "However, Synergos needed to learn about the challenges, difficulties and needs in establishing and growing this type of institution. Esquel was a crucial partner in learning about and solving these issues."

Schearer spent a month in Ecuador working with the foundation's core leadership to develop a proposal. At the completion of the nine-month feasibility study, The Rockefeller Foundation agreed to fund the start-up of Esquel using the debt swap concept. It bought some of Ecuador's commercial debt. In return, the Ecuadorian government gave back a percentage of the savings to Esquel. Those savings constituted Esquel's endowment.

This initial funding from The Rockefeller Foundation was supplemented with funding from the International Youth Foundation, and Esquel became operational in 1991.

"Today," says Schearer, "Esquel is not only creating and funding social, economic and health programs, but it is also working to bridge divides between indigenous people and the rest of society."

Esquel's work has directly benefited more than 700,000 people and indirectly improved the lives of millions of Ecuadorians, especially children and youth, women, and indigenous populations. To date, Esquel has distributed $30 million to local communities. It collaborates with more than 150 NGOs, 200 grassroots organizations, 180 youth groups, and several organizations in other parts of Latin America and in the United States.

The ties between Esquel and Synergos are strong. According to Cornelio Marchán, now Esquel's Executive President, "Synergos' technical support has allowed us to identify areas of work and development mechanisms. Its role as a networker has been of crucial importance for our growth and institutional development, through which we have attained important support for the fulfillment of our programs."

Since Esquel's inception, our organizations have worked together to strengthen the capacity of community-based organizations in Ecuador. Recently, we have collaborated on two innovative programs. One is the establishment of a consortium of Ecuadorian foundations. The other is development of a training program aimed at building future Ecuadorian leaders.

The development of the Ecuadorian Consortium for Social Responsibility (CERES -- Consorcio Ecuatoriano para Responsabilidad Social) -- Ecuador's only network of foundations and corporate social responsibility programs -- started in 1998, when Esquel and Synergos began a series of events focused on promoting and strengthening Ecuador's philanthropic sector. Progress in this initial phase was difficult, not only because of Ecuador's economic and political crisis in the late 1990s, but also because of the lack of comprehensive information about the sector's size, scope and characteristics.

In 2000, we jointly undertook research to locate and map out the characteristics of local foundations in Ecuador, Brazil and Mexico. The study identified 21 Ecuadorian foundations. In 2001, these organizations were invited to a meeting where the concept of an association was introduced. This meeting was, in itself, a bridging exercise, convening foundations that, despite working on the same issues, had never come together for dialogue. This and subsequent meetings were instrumental in establishing a basis of trust and, in 2002, Esquel and Synergos held a strategic planning meeting to initiate creation of the network.

In January and March of 2002, the two organizations convened working sessions with a cross section of Ecuadorian foundations and corporations in Quito and Cuenca, resulting in the formal establishment of CERES. These sessions were led by Rebecca Raposo, a Senior Fellow from Brazil, and a local consultant.

Despite being a young association, CERES already plays an important role in building the infrastructure of relationships and cooperation (intra- and intersectoral) that can make social responsibility the engine of Ecuador's development. It offers a safe space for the exchange of skills and experiences among staff and board members of foundations. And it convenes national seminars with the public and private sectors to discuss strategic alliances to promote social responsibility and development.

CERES is working to encourage the national government to provide financial incentives for philanthropy. CERES aims to act as an educator on social responsibility, working to increase the level of awareness and understanding on the importance of being socially responsible. It uses a variety of instruments to achieve this goal, including a newsletter, website, and a resource center that is open to the public.

CERES also offers capacity building services directly to member and non-member organizations, with diagnostic processes used to determine each organization's strengths and weaknesses, as well as common areas of need. Several Synergos Senior Fellow workshops were scheduled for CERES members in 2003 on the issues of board development, financial sustainability and resource mobilization, and communications and social marketing. Senior Fellows consultancies and other activities help connect Ecuador's foundation sector with experiences and actors from other countries, keeping it abreast of innovations and best practices.

Synergos and Esquel have begun working together on the design and implementation of a project that would build leadership capacity in Ecuador. The goal of the program is to train young Ecuadorians in the theory and practice of "bridging" leadership, allowing them to bring together diverse groups in society to solve the problems of poverty and inequity.

Esquel applied for and received a grant from the W.K. Kellogg Foundation for a three-year pilot program that will train 150 bridging leaders. This program combines formal training courses with practical experience (through case studies, simulations, internships and exchanges).

The 16-day course, taught by high-level educators, was held on eight weekends. Course topics included Self Knowledge, You and Your Community, The Challenge, The Response, Concertación I & II, Influencing Your Surroundings, and Administering and Sustaining the Collective Effort.

Guillermo Esteban Calero Moscoso, President of Facultad Latinoamericana de Ciencias Sociales (FLACSO)/Student Council of Masters in Social Sciences, said the course "helped me with communication skills, knowing how to deal with demands, respecting diversity, and knowing how to communicate the community's needs."

Marcela Angélica Sosa Muñoz is from Guayaquil and works for Fundación Leonidas Ortega Moreira, which provides scholarships for children and youth without economic resources. "This process has generated self-reflection and questioning about two of my foundation's plans," she says, "as a result of looking at the way other institutions with other backgrounds work."

For Martiza Paulina Seguar Villalba, "This process helped me a great deal because it has strengthened intuitions that I had. It has generated in me great responsibility and commitment to my work," she explains. "We have dealt with the theme of communication, how to think systematically. We have identified the limits of each member of the team and developed the capacity to negotiate with each other." Villalba works for the United Nations Population Fund and the Ministry of Human Development, where she is involved in creating the Intersectoral Organization Against Family Violence.

The Esquel-Synergos relationship is best summed up by Cornelio Marchán: "Today, we can say that Esquel and Synergos have developed a partnership founded on common visions and work objectives that have sustained a relationship of mutual respect and autonomy."