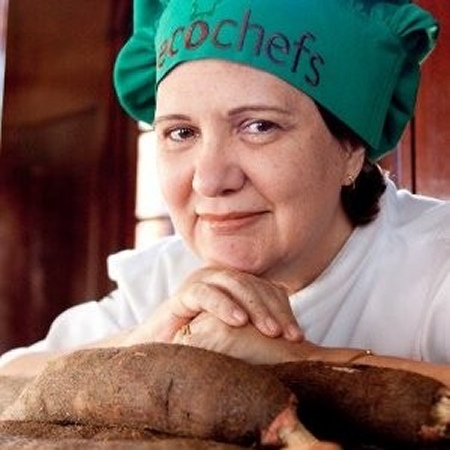 Teresa Corção is the Founder & President of Instituto Maniva (www.institutomaniva.org), an organization that protects and promotes sustainable food systems, traditional knowledge in food, improvement in the life of small holder farmers in Brazil/Rio de Janeiro State and in Amazon Biome. Her main target groups include chefs, cooks and food activists.

After joining the Slow Food Movement in 2001, Teresa started Projeto Mandioca in 2002 in order to teach public school children from the slums about manioc, an important Brazilian heritage food. Using history, folklore, and cooking classes, Teresa taught children how to prepare tapiocas and mandioca cr̻epes, while also simultaneously teaching them about their culture.

Teresa made a documentary in 2004 entitled The Manioc Flour Professor about a manioc producer in the Amazon. This documentary was shown in Dallas, Texas, as part of the 2005 Convention of the International Association of Culinary Professionals. She made a second documentary, Mr. Bené Goes to Italy, which was exhibited at the Slow Food on Film festival and at the 2008 International Berlin Film Festival. As a result of the films’ popularity, Teresa founded the Instituto Maniva in 2007 to protect and promote Brazilian food culture and small holder farmers through films, TV shows and cooking classes for youngsters and children.

Teresa joined several well-known chefs in Rio to found the group Ecochefs in 2007, which became the heart of Maniva. Led by Teresa, Ecochefs Maniva catalyzed changes in production within the Brazilian food chain promoting ancestral food. In 2011, the group began to work side by side with organic family agriculture farmers in the Jardim Bot̢anico organic farmers market, which is part of the Circuito Carioca de Feiras Org̢anicas, in partnership with the Associação Biológica de Agricultores Familiares do Rio de Janeiro.

A self-taught chef, Teresa graduated from Pontifócia Universidade Católica PUC- RJ in 1975 with a degree in graphic design. She fell in love with cooking during her two year stay in London, where she initially realized the strong connection between food and culture.

In 2001 after joining the Slow Food movement she began to research original and ethnic Brazilian cuisine long before it became fashionable. For her efforts she has received the Santander Bank Prize for Outstanding Programs for her Amazonic manioc flour project in Bragança, Pará In 2009. She has also been awarded the IACP Social Achievment Award and Prazeres da Mesa Responsabilidade Social in 2010, and the Rio Show Gastronomia-Destaque do Ano em in 2012. In 2015 she spoke at the TED Global South and also was nominated for Basque Culinary World Prize, considered the Nobel of Gastronomy. In 2020 due to the COVID pandemic she closed the restaurant and went back to the Academic world in a Master degree in Design to deepen her knowledge about the food systems communication.