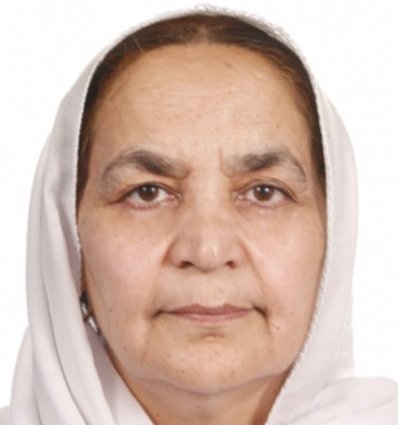 Maryam Bibi is the Founder and Chief Executive of Khwendo Kor, based in Pakistan. The organisation focuses on the holistic, integrated and inclusive approach for gender integration in their community development work focussing on girls’ education, poverty reduction, women's economic empowerment, religious harmony and responding to humanitarian crisis.  They target women, girls, men, youth and minorities directly while other important stakeholders such as political leaders, government officials and religious leaders are targeted indirectly. Much of the work is carried out in the remote areas of the Northwest Frontier Province (NWFP) and the Federally Administered Tribal Areas of Pakistan.

Ms. Bibi’s efforts for women and children’s development have been recognized nationally and internationally. In 2005, she was one of “1000 Women” nominated for the Nobel Peace Prize; in 2001, she received the Human Rights Award from the International Labor Organization; and in 2000, she was recognized by the UN with the Recognition of Services award. The government of Pakistan honored her in 2003 with a Fatima Jinah Medal in 2003 for outstanding women in the social sector, and in 2001 with the Star of Excellence National Civil Award.

Alongside her work with Khwendo Kor, Ms. Bibi serves on several boards, including Pakistan’s Society for the Protection of the Rights of the Child and Elementary Education Foundation. She also contributes to the work of the Social Welfare Department of the Government of the North West Frontier Province; the Women’s Study Centre at the University of Peshawar; the NWFP Women’s Writers’ Forum; and the Asian South Pacific Bureau of Adult Education based in India.

Ms. Bibi obtained her Master’s degree in Social Policy from the University of York in the United Kingdom.

Ms. Bibi founded Khwendo Kor in 1993. It started in one village with four staff members and has since expanded to more than 300 cities and towns and a staff of more than 340. Khwendo Kor’s main areas of work are social organization, community-based female education, microcredit, primary health care, advocacy, and partnership-building at both the organizational and community levels. It sets out to improve the education, health and economic well-being of women and their children. Khwendo Kor is Pushto for “sister’s home,” but the organization works with men and local leaders to collaboratively create strong and progressive societies.