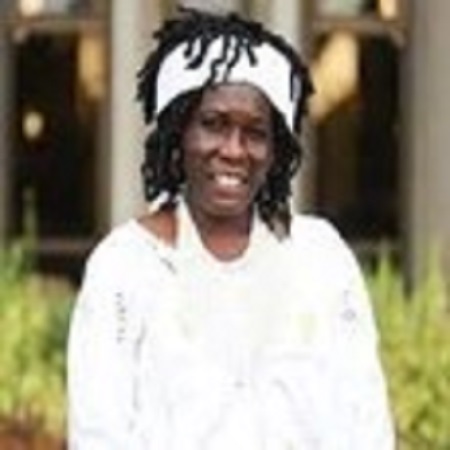 Karak Mayik Denyok Miakol is a social worker by profession, and the Founder of Diar for Rehabilitation and Development Association (DRDA - diarfoundation.org). Diar means women in Dinka, Karak’s native language. DRDA is an organization based in the Rumbek Lakes state of Khartoum as well as in Juba, in South Sudan. More recently, she extended DRDA’s reach to Uganda with the organisation now helping women and children in both countries foster hope, independence and self-sufficiency through education, farming, small business development, teaching skills and cultivating supportive networks.

DRDA’s mission is to play a leading role in advancing women’s rights by building their capacity and strengthening women’s groups around South Sudan and Uganda. They mobilize and redistribute resources that enable women to develop creative solutions to local, regional and transnational challenges. The organisation brings grantees and donors together in an international network that promotes women’s action for social change, equality, peace and justice worldwide. DRDA started in 2003 as an indigenous non-profit, social and humanitarian organization dedicated to advocate for women’s and children’s rights and serve Sudanese women in displaced camps and in war-torn zones in the newly Sudanese liberated areas.

A native of South Sudan, Karak was born in 1977 in the Nuba Mountains in the Southern Kordofan state. She has a diploma in business management and administration from Juba University in Khartoum, and has also completed her degree in Rural Development and Community Studies at Nkumba University in Uganda. Karak began to help other women in 1993 during the Sudanese Civil War, when she lived as an internally displaced person (IDP) in the Mayo IDP Camp in Khartoum. Karak volunteered at a primary school and at the M&eacutedecins Sans Fronti&eacuteres clinic center, and also taught women at her uncle’s house during evenings. This convinced both the public committee and the community leaders to acknowledge her initiative and efforts; they recommended her to an International Red Cross (IRC) program. In 1998, the IRC launched a women’s empowerment program at the Mayo Es Salam Mandella Camp in Khartoum, where the program recruited Karak as a literacy teacher. In 2008, Karak founded a 90-hectare commercial farm in the Pacing Rumbeks Lakes state, which served over 9000 women survivors of the war. The farm provided women with agricultural training, a cooperative/business program and adult education. Women who worked on the farm were able to buy food for their families and pay their children’s school tuitions. Because these women have attained greater independence from their polygamous husbands, there has been an overall reduction in household conflicts.

Karak won the Van Heuven Goedhart International Award in 2004, which she donated to the women of the Nuba Mountains. The award is given to an individual who has made a tremendous effort in fighting the difficulties of refugee life, and has also shown great courage and talent to overcome the difficulties, and is able to inspire other refugees to take their lives into their own hands again.