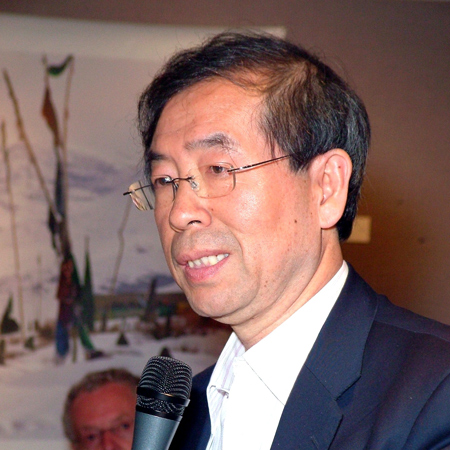 He was a founder and the president of the People's Solidarity for Participatory Democracy (PSPD) in 1994. The PSPD is a civil organization dedicated to promoting justice and human rights in Korean society through the participation of the people. Mr. Park provided a stepping stone to draw people's participation into politics and social activities. After his resignation, he founded the Beautiful Foundation, a non-profit organization, and became a director.
In the process of his work he was given the Women’s Movement award by the Korean Women's Association United, elected as the 1999 Most Distinguished & Respected Activist in Korea by the Citizen Times, designated among the 10 Most Influential National Leaders by the Weekly Sisa Journal in 1999, and has received many other awards.

In August 2006, Mr. Park won the Ramon Magsaysay Award for Public Service. The Ramon Magsaysay Award is Asia's highest honor and widely regarded as the region's equivalent of the Nobel Prize. It celebrates the memory and leadership example of the third Philippine president and is given every year to individuals and organizations in Asia who manifest the same sense of selfless service.

The Beautiful Fund is operated for the development of a society in which citizens play a pivotal role. All the revenues of the Foundation are spent in the interest of the public. The Foundation is based on the idea that public causes should be served by continuous and sustainable support, not by sporadic and spontaneous donations. That will be possible when the culture of the philanthropy is deeply rooted in our daily lives. The Foundation promotes a culture of giving and sharing by providing various methods in which ordinary citizens can participate and connect the resources and needs of society.